There comes a time for every game where the “game” part takes the back seat and the “app” part kind of takes over. I’ll explain in a moment what I mean.

Last week my latest game, Major Escape, reached closed beta status. A very select few testers are playing it and soon it’ll become an open beta. To get the game to beta, not only the main design and mechanics of the game have to be implemented, but also the user interface, menus, screens and in my case, the Leader-boards and Analytics for the game. Those last items is what I mean by the “app” part.

Take this for example: text input. I want players to be able to write the name of their character in the game. If you are playing on PC, that is not a problem, everyone has a keyboard. In mobile devices however, that can be tricky. I was able to find an extension for Game Maker that allows me to call for the virtual keyboard on the device so problem solved, right? Nope. It only works for iOS and Adroid. I also want to develop this game for Windows Phone 8 and I don’t have a way, that I know of,  to call for the virtual keyboard on this platform.

So, I decided to create my own virtual keyboard. This is a screenshot of how it looks like in the game. You can slide the letters and select the one you need. A simple interface for a simple task. 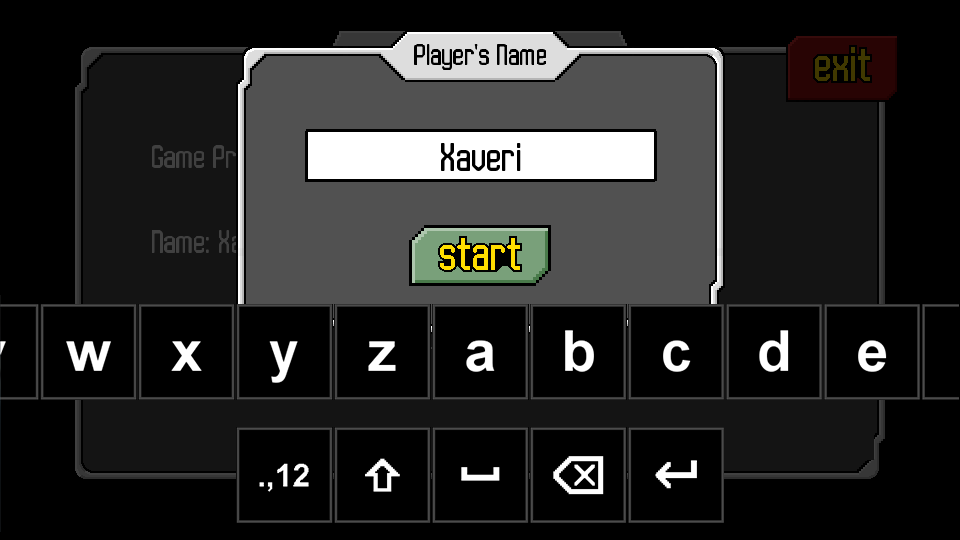 You can see a video of it in action here: https://youtu.be/_hRwnVKdMdw

I created a virtual keyboard for text input that is customizable, and that I hope can work on any platform, under any circumstance.  I will only use it when I need it, but it’s there for this game and the rest after this one.

It took me about 3 days of work to get it ready for use in the game. Those 3 days I did nothing but work in this. This doesn’t make the “game” part better, but it makes the “app” part much better and versatile. This type of work can be boring sometimes, but it is essential.